And so it begins! John and I had the pleasure of three hours of sleep last night before waking up at three in the morning to catch a taxi to London Luton Airport. About three (lucky number three, I suppose) hours later, we stumbled onto the plane, which, judging by the sound of things, contained only children. Being the only two people present over 10-years-old, John & I whispered wistful farewells to any notions of a restful flight.

And boy, did we need that rest. 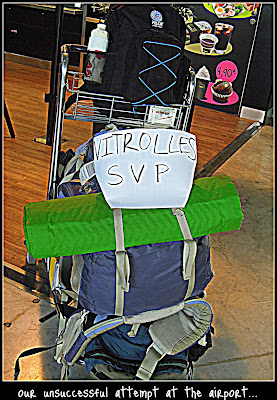 We arrived safely in Montpellier, quickly passing through customs, and then readied ourselves for my first true foray into hitchhiking! But not after first grabbing a café au lait, where I found that when I don’t know how to respond to something in French, my technique, apparently, is to tilt my head and lightly smile at the person, as speechless as (and visually comparable to) a dog. 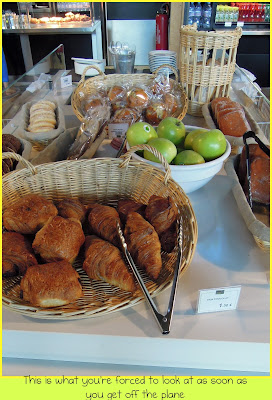 We managed to quickly exit the airport with a Moroccan woman who brought us to Nimes by about 9:45am, about 104km away from our final destination of Vitrolles, a town just outside of Marseille. I believe that the only word we managed to mutually understand was “Big Ben,” which was fine, because who doesn't like Big Ben? Once we were dropped off along the highway, we stood on the road, and found ourselves unable to resist an obligatory high-five. John and I felt assured that hitching that day would be a breeze.

The people of Nimes, however, had other plans for the two cheeky Americans.

Even though we had a great sign made on the back of a shoe box found road-side, we evinced nary a second-thought from the passing traffic. Once high noon rolled around (southern France is hot), I began scouting for napping spots (surely you aren’t surprised that I don’t mind napping on the side of a road?), and managed to find a delightful spot hidden behind some shrubbery. Lulled to sleep by the sound of passing trucks and cars, we later woke around 2pm. I wish I could say that we awoke more energized, hopeful….but we didn’t. I didn’t, at least. Where was this national enthusiasm toward hitchers I had heard about? It had been over four hours!!

And finally we gained the pity of another Moroccan. He and I were able to speak Spanish as we drove closer to Aix en Provence. Dropped off after about 15 minutes, we stood by the highway (a bustling one at that), and then hit the jackpot: Xavier! This French engineering student (who even spoke English!) took us the next 45 minutes all the way to our destination in Vitrolles! That angel in the bright blue tiny car even went about 20 minutes out of his way to get us settled, and it made the whole day worthwhile. 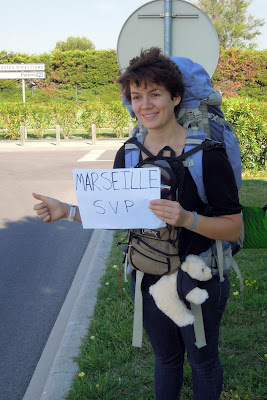 Tonight, we couchsurf with Muriel, who [thank god] speaks Spanish. Today was hard. I can be a baby because it’s the first day, and I really really just want to be able to communicate before the next days of confusing hitchhiking ensue, and my French is embarrassingly horrible.

There’s something wildly exhilarating about benefitting from the pure generosity of strangers. It’s not the adrenaline of a skydive, to be sure; it’s something…happier. This is going to be a good trip.