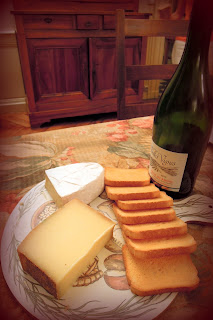 I'll be updating you on the cheeses I eat as I move through Europe. This list is going to grow.

Bleu d'Auvergne- This blue wants to be your friend. It wants to be everybody's friend. Never have I met a blue so willing to pair with red & white wine and many of the foods you throw at it. It's creamy and buttery in flavor, and with it's amazing price point, you can't not try it. Raw cow, France.

Bries de Meaux- Nope, this is not the Brie we find in America. Dont' even think about it. Nearly oozing with creaminess and with a smell of damp earth, the taste is nutty and and (dare I say it?) reminiscent of broccoli, with a luscious pâte and slightly chewy rind. Raw cow, France. 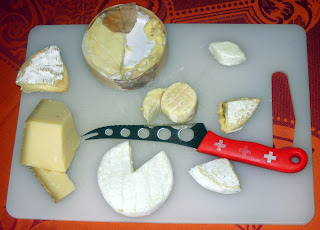 Camembert- You may think that you know Camembert, but it's doubtful that you have encountered a real one. I remember the store I used to manage would sometimes sneak in a terrible "camembert" from holland that tasted like creamy paper, and I think that this is what many people expect. A real French Camembert from Normandy should smell slightly pungent, as though you're walking through a mushroom forest after a rain, and should taste similar--mushroomy and with a bit of broccoli undertones. It gets creamier and stronger with age, so give it some time! Cow, France

Cabrales- This blue ain't no joke. Seriously, I'm not joking about that. Cabrales, best as a blend of cow, sheep, and goat's milk, may really be the strongest of the strong, and to add some bang to that buck, it's unpasteurized. Enjoy it's spicy and mouth-dominating kick as a dessert or use combined with sweet flavors like dates.

Cantal- In my head, this is the French Cheddar. No, it's doesn't really taste the same, but it would be my first choice of replacement if I were making macaroni and cheese. It's a favorite in France due to it's low cost and high supply. Buttery and mildly earthy, it's hard to dislike this cheese. Cow, France, raw or pasteurised

Caprice des Dieux- Meaning whim of the Gods, this guy really was heavenly. I had doubts, considering it is a pretty basic and bulk cheese, but it's the texture that sold me. Soft and creamy, but a bit more toothsome around the edges than a brie, aided by its taller height. the flavor is also lighter and richer than a proper brie. Great dessert cheese, as long as it's accompanied by something to jazz things up (e.g. fresh fruit, jam, Champagne). Cow, France

Chaubier- What is it about this cheese? It's one of my all-time favorites. Semi-soft with a nutty, buttery flavor and just enough tang imparted from the added goat's milk to make it pop. find it and try it. Cow & goat, France.

Comté- This is a cheese that will show you what you should actually be tasting when you ask for Swiss on a sandwich. Although it is not Swiss, it comes from the Jura Massif region which borders Switzerland, so the cow's milk tastes similar. I find it nutty and a bit fruity, but less nutty than Gruyere (another top "Swiss"). Cow, France, raw.

Epoisses (eh-pwhas)- I can only sigh when I ponder how to describe Epoisses. Human words won't do. Maybe cow words would, but I don't know any cow words. I could moo, I guess, but I don't think it would convey my feelings. It might convey how I would feel if you gave me about 10 minutes with a wheel of this stuff, though. Back to the point. Epoisses is tangy and rich, with enough fat content (at least 50%) to offset the bite of the rind. If you’re weary of strong cheeses, go for the youngest Epoisses you can find. As it ages, it becomes more soupy and stronger in flavor. You can even skim off the top and eat the inner “paste” with a spoon. Either way, this cheese likes center stage. Don’t put another food in the awkward position of trying to stand up to it. Just serve it with crusty artisan bread, toasted nuts, olives, and perhaps some cured meat.  Cow, France.

Gruyere- History records its existence as far back as an entire millennium; This is a cheese that was made to last. Try to find this as aged as possible (maybe not a millennium), the protein crystallizes beautifully and it can add a nice twist to a dish used instead of parmigiano. Otherwise, it's an amazing Swiss, with notes of the alpine meadows from which it comes and toasted hazelnuts. Raw cow, Switzerland

Idiazabal- This is a perfect example of what an aged, old-world raw sheep's milk cheese should be. Spicy, dry, and slightly smoky, it is the big Spanish brother to Manchego and what to go for if you're looking for something less sweet and more assertive.

La Peral- This little blue beauty originated with an artisan family in Northern Spain. When I was introduced, I immediately fell in love with it's smooth flavor and creamy texture, although versions I've tried since have been a bit granier. A mix of cow milk and sheep cream, it is most comparable to a young Italian gorgonzola.

Maroilles (mar-wahl)- Ahhhh the washed-rind cheeses. Stinky as sin, but so, so tasty. This cheese reminds me much of Taleggio, square "pillow" in form, creamy interior (but more "eyes" than taleggio," it has the tangy taste and sticky mouthfeel that I adore in such cheeses. I would look for the raw-milk version. Cow, France, can be raw.


Mimolette- I consider this the French version of cheddar cheese--not necessarily because it tastes the same, but because of it's semi-firm texture, bright orange pâte, and it's flavor profile that, like cheddar, has an all-around appeal. It's a bit sharp, but with more of a tang than cheddar, and an almost butterscotchy aftertaste. Cow, France.

Munster- Disclaimer: This is nothing like that tasteless muenster stuff we get at delis. Munster dates back to the 7th century and is still made by a few farms in the Alsace region of France. It's a washed-rind (like Limburger or Taleggio) cheese, so expect the aroma of dirty socks, but fear not! If you like strong, tangy, and creamy cheeses, this one is for you (the rind actually is edible, but you rarely see this happening). Try it sprinkled with a bit of cumin and neighboring Gewurztraminer from the same region. Cow, France

Ossau Iraty- World-renowned (in fact, it has been voted one of the top five world cheeses in 2011), this brebis is from the French Pyrenees and is loved by all. Semi-soft in the pâte, the taste is remisicent of honey and roasted almonds & hazelnuts. I challenge you to find someone who doesn't like this cheese. Sheep, France


Raclette- Make sure you're getting the AOC version from the Valais region to get the real deal. Raclette has a milky and mildly salty flavor with a bit of tang. The texture is semi-firm, and being a washed-rind, the rind is sticky and stinky. Served in the traditional manner, it's a real treat to eat every bit, even the smelly parts. Ideal for melting. Raw cow, Switzerland (preferably) or France.

Roy Berger Brebis- A tiny nibble of this will fill your mouth with a luscious and rich flavor that one only finds in the brebis of the French Pyrenees. This tomme is milky white and supple, with undertones of honey and almonds. And with a 33% milkfat content, you might actually be able to stop yourself after a few pieces, but it won't be easy. Buy this for a crowd and serve with French cured meats or a local prosciutto.

Saint-Felicien- This raw and soupy cheese reminded me a bit of a French Rochetta stylistically, not only because of its bloomy rind. It’s the type of cheese that will ooze right onto your plate after being cut if you can wait long enough for it to ripen properly. It’s light, rich, and very slightly acidic. Try it with an un-oaked white or champage and some French saucisson. Raw cow, France

St. Marcellin- Another cheese that should literally ooze out onto your plate, this powerhouse has a tangy bite and lingering mouthfeel. I suggest it after dinner with some nuts and fruit so you can give it time to really take over your mouth. Cow, France.

Timanoix- This amazing and rarely-seen semi-soft cheese round is made by Trappist monks of the Abbaye Notre Dame de Timadeuc in Northern France. It’s rubbed with walnut liqueur and brine, creating a taste explosion that is nutty, smoky, ever-so-slightly bitter, and rich...way rich. Eat with honey, a whole grain baguette, and beer (I'm telling you based on experience). Cow, France.

Templais- From the Aquitaine region of France, this cheese comes off with flavors more reminiscent of a Dutch & Italian combination. The younger, semi-soft version has a texture similar to havarti and a flavor of havarti, Swiss, and a touch of Parmigiano. The older version is semi-firm and the flavors of Swiss & parm have developed a bit more. None too strong, this cheese is a crowd-pleaser. Cow, France

Tete de Moine- Argue though you may, this is, in my opinion, the kingpin Swiss cheese. Nuanced with salty, beefy, floral, and nutty notes, a bite of this cheese is an explosion of flavor. I can't fail to mention that as a washed rind, it's very stinky, but the tang imparted therein is what makes this cheese so special. Although it's traditionally eaten with a girolle, you can certainly enjoy it sliced however you like. A great cheese to enjoy with brown ales. Raw cow, Switzerland.

Tomme de Savoie- one of my all-time favorite cheeses. It has a semi-firm pate with small "eyes" and a light nutty & garlicky flavor. Typically it's made with raw cow's milk from--you guessed it--the Savoie region. Try with a big Syrah or Cotes du Rhone. Cow, France, raw

Valdeón-  A raw cow and goat mixture from Spain, this is my go-to blue for a dessert tray. Strong ad tandy enough for a real blue lover, but balanced and earthy from the sycamore leaves in which it is aged. Try to find it raw!