I wouldn't have predicted that rainy days in Greece would lead me to learn how to make traditional British food, but hallelujah, that's exactly what has happened.
We have managed to get in a fair amount of outdoor work as volunteers here at the Olive Farm, but complaining would just be silly. We "toil" among rows of olive trees overlooking the small town of Zacharo and the distant Mediterranean Sea. It's heavenly (visit here for a deeper look at our current farmstay).
But it's January, and when the rain comes, there's only so much Top Chef you can watch. So, we cook.

First up is orange marmalade. The Greeks, despite their abundant citrus crop, haven't exactly figured out the best way to profit on the harvest. In fact, one pound of oranges fetches something around three cents. It's sad and pathetic, because it's hardly worth it for farmers to actually harvest the citrus, so it's not uncommon to see moldy, unpicked fruit carpeting the ground below the trees.

But the expat Brits do their part in preventing this travesty, because as a rule, British people love orange marmalade (with the exception of a certain lady named Ellie).
And thus we found ourselves in Charles and Ellie's backyard, strolling amongst the trees to find bitter oranges and a few lemons and grapefruits to make what would be one of the best marmalades I've ever tried. Charlie threw in some gargantuan hunks of ginger to spice things up a bit (who would've expected such a stray from tradition out of a British person!?) and it made things about ten times more exciting. Exciting marmalade! The queen would faint. 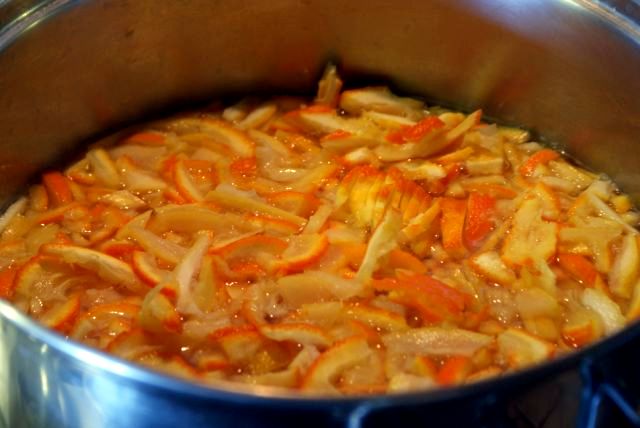 Authentic British Orange Marmalade with Ginger
This yields about five pounds of marmalade. Since the peel is consumed, I recommend using organic fruit.
Ingredients


*To vary the flavor, use a mixture of 3/4 bitter oranges and the rest a combination of lemon and grapefruit

Directions
First of all, place a small plate in the freezer (more on that later).

Clean the fruit and cut in half. Juice and reserve product for your drinking pleasure. Scoop the juicy membranes from the fruit shells and reserve this along with the seeds in cheese cloth or muslin. Tie off and place in a large pot filled with six cups of water.

Take the peels and their pith and chop into your desired consistency. Extremely thin strips about 1/2-inch long are traditional and my favorite way to go. Add this and the minced ginger to the water.

Bring water to boil, then reduce heat to a very low simmer, cover, and cook for about two hours, or until the peel is tender.

Remove cheesecloth/muslin and squeeze all the liquid from it. Add the sugar to the pot and stir until dissolved completely. Then bring mixture to full boil and maintain this for about 15-20 minutes, or until mixture darkens and setting point is reached. To test for the setting point, place a teaspoon of the mixture on your chilled plate and allow it to sit for 30 seconds. Afterwards, run a spoon through the middle and if there is a clean line, the marmalade is ready.

Skim the marmalade of any foam that might have come up, allow to cool for five minutes, then begin jarring for storage (here's a resource on how to jar).
Cornish Pastie
Next up we made Cornwall's claim to fame: The Pasty (pronounced "pah-stee"!). These savory meat pies were the traditional miners' fare back in the day, and were the perfect meal because tin miners could hold the thick crust with their soot-covered fingers and eat the filled part of the pie without contaminating themselves with tin. In case you didn't know, tin isn't the best flavor.
The tradition stuck, and whether you have tin on your fingers or not, pasties are a great and fantastically hearty meal. The recipe usually calls for a filling of steak, potatoes, onion, and swede/rutabaga/turnip, but you can substitute the swede with kolrhabi or any firm root vegetable. In fact, you can go ahead and substitue everything with anything, because when you put something into pastry dough and make yourself a mini pie, it's pretty much guaranteed to taste good.
Steak, blue cheese, and red onion? Chorizo, cheddar, and tomatoes? Or how about chocolate, peanut butter, and banana? Maybe I just crossed the line, or maybe I'm a genius.

We used this recipe for Classic Cornish Pasty from the BBC website and quadrupled it to store extras in the freezer after baking and cooling. They reheat beautifully!
On another rainy day, we made the uber-British Steak and Kidney Pie. Charles and Ellie's neighbors typically throw out the kidney when they butcher their cows, so they now save them and thus enable us to make these somewhat peculiar delights (kidney can be weird). Once again, we made a surplus so that Ellie could freeze them for quick and easy meals later on. Genius!

Unfortunately, instead of providing you with the recipe, I'm just going to taunt you with a picture. Google it, old chap.
And don't think the idea of how lucky I am that I am allowed to cook for my volunteer "work" is lost on me. This is awesome .
If you're curious about what John does on rainy days, he colors and plays princess with Lexi.
We're all getting in touch with our feminine side, I suppose.