Bread has been the main ingredient in three of the past four meals I have eaten.
This. has. to. stop.

Last night: a mix of dips and spreads to be enjoyed on none other than a vessel of bread. There were some wonderful bread varietals (tomato & tuna, zucchini, baguette, crostinis...) and the dips were even better (pate, anchovy sauce, hummus, guacamole, tuna), but can I get a carrot or something? (no.)

Can I get some something else that's fatty? (why, yes! Didn't you see the newly-sliced saucisson on the table?)

This morning: Bread, butter, and nutella! And I don't mean to come across as bitter per se, because this is probably the exact meal I would request before my execution, but I am not, in fact, about to be executed, unless it is through eating myself into a black hole of gluttony.

And for lunch? Cheese (add Tomme d'Savoie and Petit Munster to the roster), anchovy dipping sauce, hummus, saucisson, and none other than baguette and crusty wheat loaf to transport it all into my salivating mouth. 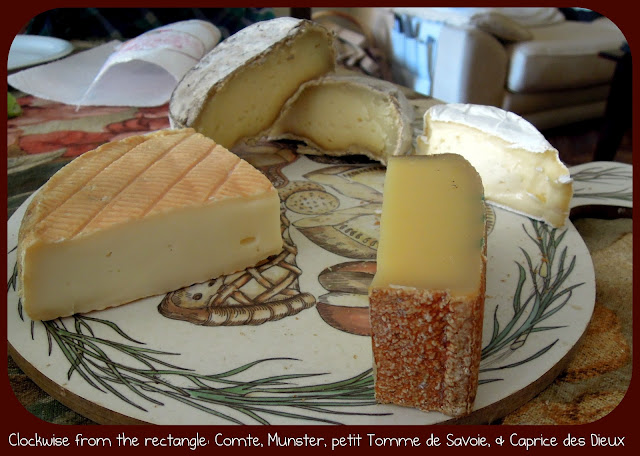 You probably think that this all sounds wonderful. But is it wrong to say that I'm suffering just a little over here? Should I be embarrassed to tell you that I smuggled a few pea pods to the lunch table and discreetly spooned some hummus atop one of them, but was promptly caught and giggled at for being "so American"? (yes, yes and the walls of your house are older than my country, I know.) I am sorry that a combination of my mother's and father's genes causes bread to actually skip digestion and be immediately transported to the area of skin directly beneath my ass, but we Americaines must fret a bit over these things, and the French, apparently, never gain weight.

Ok, I'm done pouting. I really love this place. All of it. Everything that is happening is great, and most of that everything has to do with food.

Tonight, for example, we finally had cheese as an appetizer (instead of a pre-dessert dessert), but it was in the soft and delicate form of fromage blanc (it means "white cheese" & Vermont Creamery has a great one). You've probably seen it in the store and not really known what to do with it--well, allow me to offer an idea...
Real French Onion Dip (Courtesy of Monique Michel)
Ingredients
6oz. fromage blanc
1/4 cup finely diced chives
1/4 cup finely chopped white or red onion

Directions
Mix, let sit for 3 hours in the fridge (or not, if you like stronger onion flavors), then eat! I ate mine by the forkful, but it would also be good with bread or fresh veg.


Since I didn't make this personally, we'll have to take Monique's word for the recipe. This is amazingly fresh tasting & light, so it's great for summertime. While you might think to add worstershire or caraway--don't! Just let the melt-in-your-mouthiness of the cheese take over.

After eating way too much dip, we had dinner: a French ragout of beans, artichoke, zucchini, onion, and some chopped hot-doggity-like sausage for dinner that was perfect for the weather, which had turned a bit cool & rainy. I threw in a bit of the French fromage dip, as I probably would've put that dip on anything put in front of me. Go ahead, put a shoe on the table.

Strawberries and Cream
For dessert (this is after the cheeses were pulled out yet again--Jesus!), we had fresh strawberries in cream that had been whipped with a bit of confectioner's sugar (to taste). If you want to make this, just make sure to keep the cream from getting too thick, as seen in the picture. It's a great, super simple dessert. Pop a few mint leaves on there for color and taste. You can also throw strawberries in with our new friend fromage blanc (most fruits would be great) and serve with honey drizzled atop. Even better? Chestnut honey.