If there really are parallel universes, I can only hope (aggressively) that in at least one I continue to live with the Michels. 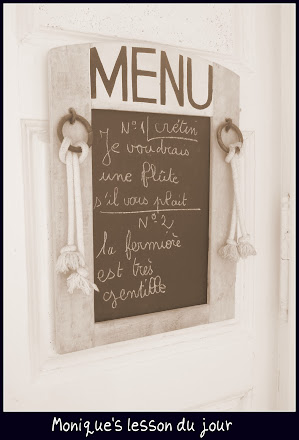 Setting: The Michel apartment in Vienne, which is smack in the middle of downtown and caddy corner to such trivialaties as (1)a 13th century fortified castle (2) the Roman remains of the Temple of Augustus and Livia or (3) an 11,000-person-worthy ancient Roman Amphitheater (by the way, check out this amazing festival coming up at the end of June with part being held in THIS amphitheater!). Even the apartment itself (as one of their sons kindly reminded us) has walls that are older than the country of the United States (2 points France).

And so I would go on in this parallel world, eating bread, cheese, and saussicon on a daily basis and never gaining weight (it's not just a rumor that the French do this) and drinking espresso after dinner but never having trouble sleeping. And my parallel maman Monique would teach me a fluent and colloquial French with unrelenting force but just enough kindness to keep me going.

And since we're dealing with ideals, let me just throw in that I would also never suffer from seasonal allergies.

Oh, and I would never have to brush my teeth or wash dishes.

So we arrived, again smelling repulsively (you might think that this is nothing new for me, but I'm really setting new standards over here), and were again ushered quickly into the shower after greetings (I find this deeply funny). Afterwards, Monique and Roland kindly offered us radishes (served with a spot of butter & salt) and a light salad of hard-boiled egg, diced sausage, tomato, some lettuce, and vinaigrette. Then, they gave us ice cream (the strawberry stuff you get in the states can´t hold a candle to what´s over here). And then, they gave us cheese with crusty french baguette (Comté and Caprice des Dieux, to be exact).

Then, we climbed into a (real!) bed and had a deep and restful sleep.
The next morning, after some fruit and crusty bread with nutella (everybody, so far, has had king-size bottles of this dangerous choco-hazelnut spread, and I foresee a problem with this), John and I studied French and had lunch with Monique during her lunch hour (rather, hours--they take 2 in France). She made some thin sausages, mashed potatoes, and a salad.

I tried to fill up on the salad :/

We then began brainstorming for that night's meal, as we would be cooking for the Michels. I decided on a standby that my mom introduced to me back in college. It's amazingly simple while seeming complex, and great for feeding a crowd. Come dinner time, as an appetizer we had toasts with the best olive tapenade I've ever had (homemade, of course), and then John & I rolled out the Mediterranean Baked Chicken Thighs, Garlic Asparagus, and couscous.
Mediterranean Baked Chicken Thighs

Ingredients
4 skin-on chicken thighs with legs, rubbed with salt and pepper
1 1/2 cup quartered artichoke hearts
1 medium zucchini, sliced into thin circles/moons
4 large cloves garlic, cut into large chunks, reserve 1/4th
1 red onion, cut into 3/4 inch inch wedges, pole to pole (keep the wedges together to maintain a stronger onion taste, break them apart if you want them to cook down a bit more)
3/4 cup quality pitted olives
2 1/2 tbs capers
1-2 cups cherry/grape tomatoes (at least 20 or so, and cut the bigger ones in half)
6-8oz feta (make sure it's sheep or goat's milk--cow's milk has too much fat and it disintegrates under the heat)
1 lemon, 1/2 sliced very thinly into moons, the other into wedges
If skipping the marinade*: 1 tsp oregano & basil, 1 tsp cumin, and a dash or two of cayenne 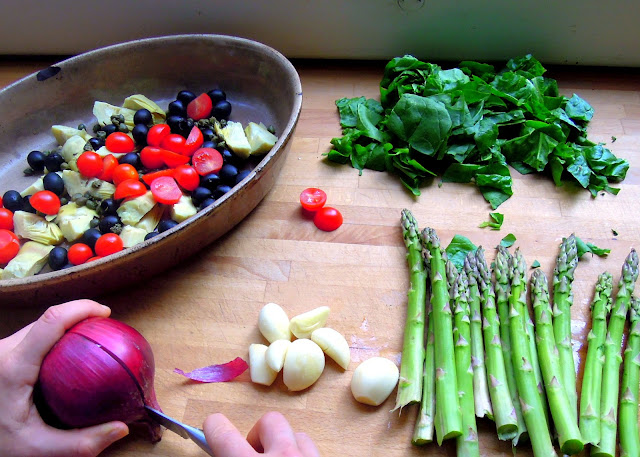 *If you'd like, marinate the chicken no less than an hour ahead of time with a mixture of 1 part [something acidic] to 3 parts oil and additional spices. I used a few tbs caper juice and red wine vinegar as my acids and sunflower oil a couple glugs of EVOO. As for seasonings, I used 1 tsp each oregano & basil, 1/2-3/4 tsp cumin, and a dash of cayenne. Stir all these things together, then liberally add the well-salted and peppered chicken. Make sure it is covered by the marinade. Refrigerate 1-8 hours.

The dish is quite flavorful on it's own, so if you're short on time it's not the end of the world without the marinade
Directions

When ready to cook, tuck the reserved 1/4 garlic under the chickens' skin and then nestle the chicken thighs in with all of the veggies. I pour the marinating liquid over everything because I buy trustworthy chicken and it adds sooo much flavor. Place the lemon "moons" atop the chicken (these will add flavor, but also be wonderful to eat afterwards).

Glug on a few swigs of EVOO, cover it, and throw it in the oven. After 15 minutes, remove the cover, crumble the feta into large chunks atop everything, and continue to bake for about 35 minutes. If chicken looks dry at any point, spoon some of the liquids that collect on the bottom of the pan atop.

Once chicken is very nearly cooked through (155 degrees, generally around 40 minutes), you have two options:
(1) if you like to try for a crispy skin, set the oven to broil, pull the chicken thighs up so they rest atop everything and clear the other veggies out of the way, then broil for 2-3 minutes, keeping a close eye on things to prevent burning.
(2) continue cooking as-is, but I suggest the crispy method...

Chicken is done cooking at 160. Serve as-is from the baking dish, garnished with a couple lemon wedges.
Couscous is of cous the desirable accompaniment, and the best part is you can simply use the liquids and veggies cooked with the chicken to flavor it.

The Savings: Chicken thighs & legs are flavorful, juicy, and super cheap! We fed five  people with four large ones. Throwing in a variety of other strong, yet inexpensive flavors like olives and lemon kept the price of the dish low, but pleasure-factor high. Couscous is great for feeding crowds, and is only about $3 per pound!

It goes without saying that the meal was trés bien. And surprise surprise, the cheeses we had met the night before made another appearance for dessert--high cholesterol be damned!
I will note, however, that back in the States we always have cheese before the entree, and people like me stuff themselves with it and end up flirting with the idea of a future relationship with that guy Lipitor. If we all waited until after dinner to eat cheese, maybe we simply wouldn't have enough space to literally eat enough cheese to suffice for a meal...


Tomorrow: we hike--sign up to follow Chowgypsy in your inbox!