Visiting the Cailler Chocolate and Gruyere Cheese Factory...IN ONE DAY

It would appear that the Martine & Patrice are planning to jam as much Switzerland culture as possible into our four-day sojourn in Neuchatel. Look, maybe I just want to relax, you know? Swim in the lake…read…do some intensive lounging… That is, unless, you could offer me something…better? And really, the only thing I can think of that would be better is eating cheese and chocolate all day.

Excuse me? That is what you’re offering?

Of course it is.

You win again, Switzerland.
Today, the ever-obliging Bijons brought us to the gates of the—THE—Gruyere cheese factory. And guess what we did afterwards? We went to a CHOCOLATE factory, specifically, Cailler brand—producer of the oldest Swiss chocolate brand still in existence.

Whose life is this? Could you remind me?

Right. Of course. Silly of me to ask.

Let’s see if I can get through this without lapsing irrevocably into reverie.

Gruyere cheese is a kingpin. It’s a sensei. It’s the grandfather cheese that slowly shakes his head as he looks upon the infantile, pre-sliced supermarket “Swiss” cheeses with a blend of bitter, crinkly-eyed amusement and overwhelming pity. History records its existence as far back as an entire millennium, but it was first titled Gruyere in the 17th century. This is a cheese that was made to last.

To carry the title of a certified A.O.C. Gruyere, the milk must come from cows fed only mountain grasses (summer) or hay (winter), and coming from within about 12 miles of the fromagerie, or cheese-making facility. The milk stays unpasteurized, and once molded, it's aged atop spruce shelves in huge rooms made as similar in temperature as possible to natural caves. If you want an in-depth description of the process (you cheese lover, you), click here.

It is the most popular cheese to use in fondue, and back when I was the cheese girl, it would fly off the shelves during Christmas for this very reason. Gruyere insanity. It is, in fact, the cheese that forced me to quite disdaining the Swiss varieties. Indeed, before trying Gruyere, I had never actually had a real Swiss cheese. Is this a love song?
Real Swiss cheese is something you should try, and there is a good chance that you haven’t yet, especially if you’re from America. The stuff you get in delis is plastic compared to this. Look for Gruyere, Appenzeller, Comté (France), or Tête de Moine (my personal favorite, also from France).
As for our Gruyere tour, it was a nice self-guided affair with mobile “phones” to hold up to your ear so that each step of the process could be explained. I was most excited to see the brilliant method of using small "scent boxes” to explain terroir and cheese. Terrior is certainly not a term that should be applied only to wines; an artisan cheese is screaming with its own terrior tale. Experts cite that there over 75 identifiable scents in Gruyere, and you won’t be surprised to find the source of many of those scents growing in the alpine meadows in which the cows graze. Slowly savoring Gruyere while sniffing the various sample scents, it is easy to make the connection between source and end product. Flavorful diet=flavorful milk=flavorful cheese, ya dig? Besides the undeniable taste of Alpine herbs, Gruyere has a unique taste of toasted hazlenuts—something I don't find in other Swiss cheeses. Of course, the flavor changes subtly depending on the cows' diets.
If you like all this talk of Swiss cheese, be sure to check out this authentic fondue recipe. But I'm warning you, it's dangerous.

Luckily, La Maison du Gruyere did not provide enough samples for me to go regrettably overboard on cheese, and I had plenty of space for our visit to the Cailler chocolate factory. After waiting in the swarming gift shop filled with excitable, chocolate-mouthed children and women who felt fat and ravenous, our tour began. It was pretty cheesy, but an informative brief history of chocolate and the Cailler brand. 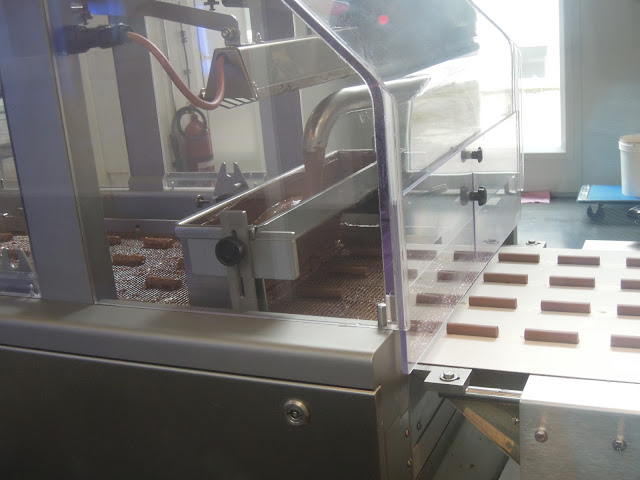 The best part about the tour was that at the end, you emerge into a room full of chocolate samples. Like, 25 different kinds of samples. We entered this room and I promptly blacked out. Upon regaining consciousness, I deduced that I had probably eaten more than half of the proffered sample varieties. I am admittedly a chocolate snob, but a room full of treats reminiscent of my childhood sent me mildly over the edge. I’m not sure what I love so much about milk chocolate when I know that I neither like the flavor nor the physical repercussions of its consumption, but if you put a plate of free chocolate in from of me, I am going to show it who’s boss.

And when I’m finished, I’ll realize that it’s the chocolate, actually, who's boss.

Fail.
Once we returned home, filled with the richness of chocolate and cheese, we had a benign dinner of pasta and Swiss veal sausage (remind me what it’s called in the comments section if you know its proper title?), with a side of my good friend Whole Grain Mustard. It was the ideal follow-up to last night's melted Swiss Raclette—if you're going heavy, you might as well go all the way, right?.

And can you guess what we did next?


(Click here to receive updates on all of my adventures involving [way too much] food!)