How to Shop With Israelis + Healthier Homemade Sriracha

Have you ever been in one of those situations—at your grocer’s meat counter, for example—where you’re waiting and someone comes up and begins to wait beside you? You both wait, staring at the meat, the walls, the items in your basket…and then the butcher appears.

He motions for you to go ahead. You, suddenly unsure of whether it would seem petty to take your turn rather than just, you know, play the “it’s ok, I’m a totally relaxed and person who doesn’t mind spending extra time in the grocery store” card, do this tilt-and-shake-your-head thing and with a grimacing smile, tell him to go ahead. And then, either this game continues, each one of you ushering the other one forward, or he simply goes ahead, leaving you wondering why the hell you didn’t just take your turn.

Let’s take a look at Israel:
Lines don’t exist here. Here’s what has to happen: walk up to a counter, steel yourself against any onslaught, and hold your ground until you get that attendant’s attention. Let down your guard for one second and you’re done for. The Israelis will smell your weakness, ya schmuck. Enjoy your time at the back of the nonexistent line.

I believe I’ve come to understand why the Israeli people pretend that lines don’t exist: Apparently, every trip to the market is the Israeli family’s attempt to shield themselves against the coming apocalypse. One look inside the majority of shopping carts and—if your head doesn’t explode—you will be able to discern no pattern, no rhyme or reason, and no mercy. It’s as though the wielder of the cart has put on a blindfold and blasted through the aisles, throwing out both arms and savagely tearing down whatever item makes contact with her open hands.

So this is why, when waiting at the butcher’s counter, you either get in, or get out of the way. Everybody has to get home to prepare for the apocalypse.
But the thing is, I like this frenzied Israeli outlook. I’ve worked behind a counter in the States; I’m well-familiar with the strange dance of misplaced politeness and misguided motives. Indeed, I am that person who pounces on the insecurity of a fellow customer-in-waiting: “Oh, you want me to go even though we both know you were here first? Why thank you, enjoy your wait!”

These Israelis are merciless, but they’re straightforward, and straightforward is just another way of saying honest. They want to get their shopping over with, and if you’re not confident enough to stand your ground, they’ll stand on your ground for you. No hard feelings, k?

There are a few things that I could think of to complain about regarding Eilat, but having people try to pass me when it’s my turn is not one of them.  I love the feistyness. I love that that if I call someone out, they smile. I think I even get some street cred. And then, as I fumble my way through Hebrew with the non-English speaking attendant, my erstwhile competitor steps forward and begins translating for me.
The Israeli people are feisty… quarrelsome, even, if you press the right (wrong?) buttons. But they’re honest about what they feel. You won’t find a false sentiment among them.

So in honor of this fiery, hot-blooded culture, I decided to cook up a batch of something I’ve been longing for since moving here: hot sauce. Of course I could buy hot sauce, but as I am unable to read the labels (hello, newfound illiteracy), I've refrained from buying anything due to my overwhelming need to know what is in the food that I eat (what if there’s MSG!? What if sugar’s the main ingredient!? What if it’s actually…bottled poison!?).
Enter: Homemade sriracha!

Enter: Sriracha that’s even better than what you buy in the store!

Enter: Sriracha that is good for you (or maybe just not necessarily bad for you…)!

Eating this sweet red fire sauce makes me feel like a badass; primarily because every time I purchase something spicy in Eilat, an Israeli tries to warn me that I won’t be able to handle it. Don’t you know how many Mexican restaurants I grew up around? I’m from Gerogia. Come on.

Maybe I am crazy/foolish to eat spicy sweat-inducing anything when it’s 100 degrees outside, but hey Sriracha, I’m no fair-weather friend. You and me. ‘Til the end. And hopefully that end consists of ice cream.
Healthier Homemade Sriracha
(adapted from America’s Test Kitchen) 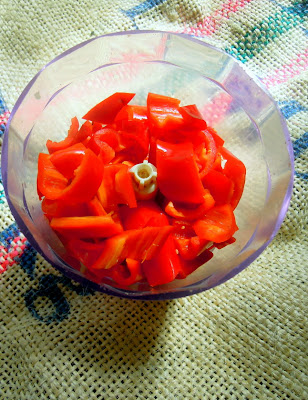 Directions
Pull out a pair of rubber gloves that you probably don’t casually have around the house.

Remove stems from peppers, cut in half, and use your fingers to scrape out the seeds. This is where the gloves come in handy, because if you touch your eyes with hot chili pepper on your hand you’re going to hate life for a little while.

"Cube" the peppers, then puree with garlic, water, paprika, and vinegar until mostly smooth, about 2-3 minutes.
Move mixture to saucepan and add sugar, honey, and salt. Bring to boil and reduce heat to medium low, keeping the sauce at a simmer. Stir occasionally and skim any foam that forms at the top. Taste—if you dare—and feel free to add more sugar if it seems really unbearable. Just remember that it will mellow with age, just like your dad.

After about 30-40 minutes, or once your desired consistency is reached, remove from heat and allow to cool before moving it to some [preferably glass] container. If you like things like extra work, you can blend the sauce again to make it smoother, but I like a chunkier texture.

Wait a day for the flavors to meld together and then let the masochism begin.

*If you want to add a bit more complexity to your Sriracha, roast some of the peppers. To do so:

Toss ½ pound (or a third of all your peppers) lightly with about 1 tbsp EVOO. Since they’re small, cut off the stem, but you can otherwise leave them whole. Throw on a baking pan and put on the top rack of the oven, turning every 15 minutes or so until browning occurs on parts of the peppers and skin looks crinkly and burnt. Should take about 30-40 minutes overall. Remove peppers and put in a covered bowl for 15 minutes, where the trapped steam will allow you to easily remove the skin. As you remove the skin, push out most of the seeds as though you’re squeezing a tube of toothpaste. Keep any oil and juices that’ve pooled in the baking pan to add to the overall mixture. Follow with the normal recipe.
I used the roasted pepper method and love this sauce. I even like it better than what I used to buy in the States. It's richer, smoother, and has the perfect blend of sweet and salty. If you check the nutrition label on the store-bought stuff, the sodium level is 100mg and sugar is one gram...per teaspoon. Kind of puts a wrench in the whole "I'm-going-to-eat-Sriracha-like-soup" plan, doesn't it? All that's knocked down significantly in this recipe, so you can focus on guiltlessly savoring the taste of those bright and burning red peppers.

The recipe with more sugar and salt says that this will keep for at least a month in the fridge…considering I used less of these it might keep for a bit less time (if you happen to be a food scientist do feel free to chime in), but I’m willing to take my chance…if it even sees the end of this week...

The Savings: I eat a lot of sriracha. If you eat a lot of sriracha, this recipe is a money-saver no matter how cheap you find a store-bought bottle. Buying whole ingredients and putting a little elbow-grease into them is typically like that when it comes to savings. And on top of making a month's worth of sriracha for something around four bucks, you don't have to feel guilty for consuming a month's worth of sodium every time you eat this!


Keep the spice in your life...sign up to receive posts in your inbox!