Some of the most excellent things about living in Israel are the abundant dates.
In case you singles just began looking up flights to Israel, I'm talking about the wrinkly old fruit. Sorry, pal.

One of the least-excellent things about living in Israel is that sometimes you have to cancel the your plans for traveling through its countryside because it has some rather large problems in the realm of getting along with its neighbors.

The Israelis look at dates and they don't realize that they're looking at an exceptional work of art--something that is coveted and pined after by the Chowgypsy when she lives in America. There are so many dates here that sometimes—I shudder to say—they are allowed to go bad. I didn’t really know that dates could do this, but they can.

When I worked at Kushi's zoo, there were so many that we were feeding them to the goats, poultry, camels, turtles, etc. by the bushel. It was sad but kind of exhilarating in a food nerd kind of way. It's like having too much chocolate. You can adopt this new attitude of "I don't have to portion out anything! I can make as many brownies as I want!"

In my State-side world, there are two problems with the date: #1 It's expensive #2 I feel guilty buying something that has to travel so far to reach me (they’re usually from India or something). So suffice it to say that I am eating enough dates here to last me for all the years to come when I'm living in America forcing restraint upon myself. 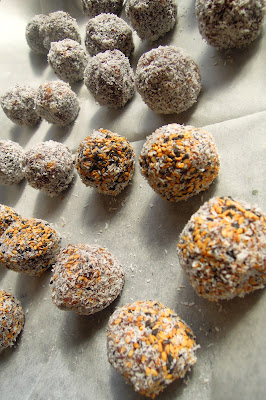 (By the way, check that box of dates in the grocery store thoroughly--even if the box implies that the goods are from somewhere exotic, you'll often find a little sticker saying "product of [you guessed it] Mexico." I don't like to be misled, even if it means the food is actually grown closer than where I expected.)

While volunteering at the Eilat Botanical Gardens the other day, I watched a big crate of dates stand by in the most lonesome matter that you can imagine a crate of dates standing by, so I casually suggested that I take some home. Access granted! Why is taking home a free bag of dates so invigorating? [because you're a loser]

Despite my desire to cover my 40-or-so dates in melted dark chocolate and peanut butter and spend the rest of the day feeling both gluttonously terrible and stupendously satiated, I decided to go for a more reasonable and healthy recipe: date balls.

After several scrapes with losing a finger while taking the pits out of way too many dates, I've found the right stuff.

This recipe has the perfect amount of sweetness to flirt with the border of being called a bona-fide dessert, but it's salty/savory enough that you can excuse yourself to eat a couple for breakfast and not feel guilty (most of the sugar is in the fruit, anyway). They’re also a great snack if you need a boost during the day. What I’m saying is that you can eat these whenever you want and feel happy and energized and slightly deviant afterwards, and that is a great thing.
Since they're high in protein and calories and packed with scandalous flavors that in excess would could render a dessert, I call them Date Energy Bombs.

Seriously, these guys want to date you, so just give them a chance?

Directions
Soak dates for about five minutes in hot water. Meanwhile, grind the nuts in a food processor or blender until you have tiny pieces and "nut dust" (that should be a band name).

Drain dates* and add them and the rest of the ingredients to the food processor, and blend until you have a thick paste. It shouldn't be too wet, but if you find it completely unmanageable, add more finely ground nuts or something like wheat germ.

Let mixture set in the fridge for at least an hour, then remove and mold into balls. I aim for a two-bite size. Any more and it's a bit(e) too much.

Meanwhile, you can assemble your toppings. Simply pour your topping of choice into a bowl and set up an assembly line for yourself and dip, baby, dip.

*I like to use the drained "date water" to cook bulgur...auto-flavor!
If you're feeling lazy, I'm going to tell you a secret: You don't actually have to do anything with your date mixture. You can spread that goodness on a cracker, a pancake, or...dare I say? A PEANUT BUTTER AND DATEBOMB SANDWICH?!?


The Savings: When you can find a good deal on dates, these little bombs are a great treat to make because eating just a little goes a long way to fill you up and provide nutrition. If you don't want to splurge on dates, you can always try other dried fruits--even raisins. I'm all about small-sized foods that make a big impacts, because hello, then I don't eat as much and I'm stretching that dolla bill, y'all.

By the way, did you know that fresh dates look like this?