Victory! By my sixth night, I had finally adjusted to the things that go squawk in the night, ignoring the animal cries and the occasional slammed midnight doors of neighbors to achieve a complete and uninterrupted night’s sleep at my "desert getaway."

It was a successful feeling, this final achievement of peaceful coexistence and restful sleep within the cacophonous bubble that is 101 km.
Nonetheless, I was ready to leave. The head of the Wwoofing program, Matan, a man in his late-twenties who had just left a position as an army commander, didn’t quite seem to grasp that a volunteer isn’t simply a body who provides free labor. As it was, the zoo manager and Matan preferred to use the volunteers as “grunt” workers—cleaning poo, feeding, and general tackling of tasks that the zoo workers themselves didn’t care to bother with.

This, of course, is the risk you run with the Wwoofing program: exploitation. Once a farm has had a couple of people who don’t mind working six days a week for six hours a day (or more), they come to expect every subsequent volunteer to have the same disregard for personal free time.

Luckily, the Chowgypsy has no qualms with sticking up for the value of her time. Ella (my only friend and fellow volunteer) and I simply made sure we put in a good day's work and then went about our day, despite the zoo manager's attempts to make us stick around. 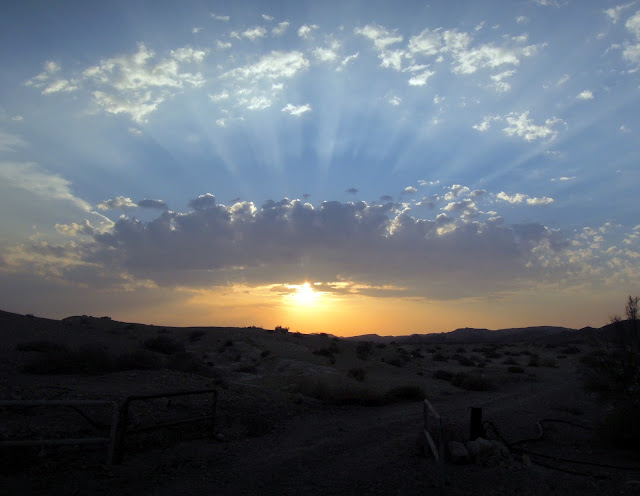 Anyway, we had sunsets to attend to. As I was jogging out on Mars on my last day, I came around a bend and had that "oh-shit" moment, where you realize that there is either a black thunder or dust storm coming straight at you. I went into high gear and let my beloved five-fingers carry me the rest of the way home, where I barely missed the black clouds that were positioning themselves over the zoo.

I had my camera around before and after the storm, for one of the most celestial sunsets I've ever seen. If you scroll through the pictures you can see how it progressed to the night's storm.

(right about here is where the "oh-shit" moment hit me)

The Grand Finale!
I didn’t find out until my last day, however, that all week I had actually been running in a restricted zone that the Israeli Defence Force uses for shooting...you know, rockets n' stuff.

Oops, thanks for letting me in on that little tidbit, Matan! (Do we now see how communicating with your volunteers is a good thing?)

Oh, and John came up for a visit on the last day, which was swell.
Now I am back in Eilat, rejuvenated from my mini volunteer vacation, but only staying for a couple of days until I head off to my second farm outside of Jerusalem. I feel a bit guilty leaving John behind, but the time spent alone while he is at work has reached it’s limit.

Luckily, I can move a little faster than this guy (this post can fill you in on the rest of the animals).