To celebrate my return from the animal farm (actually, we were just out of food), we went to Eilat's supposed best place for hummus.
The place was empty, usually a bad sign, but I've learned that anything goes in Eilat; an empty restaurant may simply mean that there is an obscure Jewish holiday that bans chickpeas on Tuesdays, or that everybody is at the grocery store until midnight buying things excessively for the simple sake of driving me insane. Anything goes.

Being as John and I are essentially illiterate whilst in Israel, the sole pseudo-hippy expat Argentinian waitress and I discussed the menu, and I thought I was missing something as I kept asking, "but what main courses do you have?" She would respond with something like "well...it's mostly hummus." And then I realized that "mostly hummus" meant "only hummus."

Which was fine...great, even. If hummus is the only thing they do, I'm assuming that it's pretty fine stuff.

One of the five-ish hummus options came with ground beef, so we opted for that. Otherwise, we requested that she bring out the typical accompaniments and whatever else she thought would be enough for two people to share.

For starters, we received five beautifully greeny-browned falafels, green olives and pepperoncinis that appeared to be home-cured, two white onion quarters, two warm, pillow-like pitas (why can't we find them like this in the States??), a spicy green sauce, and the ubiquitous tomato, cucumber, and parsley salad.
The falafels were perfect--not too greasy, and since they were made by a pseudo-hippy, I'm hoping that this is because they weren't deep fried to hell and back (that is an example of me putting labels on a stranger). We were surprised to find that eating the raw white onion with the other goods was actually really pleasant, and the tomato cucumber salad was bursting with fresh flavor--unlike many of the plasticky salads you get at lower-quality places.

The still-warm hummus came out soon-after, hopefully because it had just been made, but the more reasonable/pessimistic assumption being that they simply warm it up. I should have asked, but I'll take it either way. Served in the traditional manner, it's kind of "bowled out" in the middle so that there is a place for fillings/toppings, in our case ground beef, olive oil, and parsley.
While I give the dish points for fresh ingredients, the flavor fell flat. It tasted of pureed chickpeas and fried ground beef, and little else. Bland ground beef is somehow sacrilegious. I'm not even religious and I'm saying that, so that means it's a big deal.  And the fried flavor makes me wonder if it's really olive oil in that picture :( Perhaps they are trying to portray flavor of a dish at it's most basic level, but can't we sprinkle a little paprika and cumin on top of things? Some salt?

The accoutrements provided a nice backdrop for the slightly bland flavors of the hummus and beef because they were flavorful in themselves. I'll give points for presenting an enjoyable meal based on whole ingredients and no spices other than parsley. The green spicy sauce was extremely mouth-numbing, but also strangely lacking in flavor--garlic clove, anyone?
Also served was a cute little dessert of tapioca pearls in coconut milk with a tiny sprinkling of cinnamon, two date balls sprinkled with shredded coconut, and two perfect espressos. Since I had recently made my own date balls (recipe to come!), I had something to compare these to...again with the flavors: they were boring where they could have been sweet-tooth quenching, but nice and savory overall. 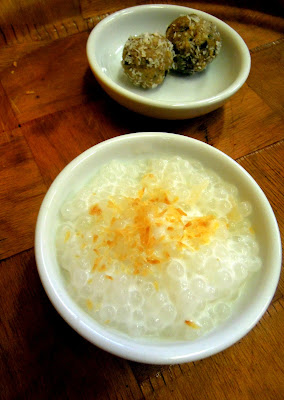 The tapioca pearls were an unexpected Asian treat. They were perfectly light with just the right amount of cinnamon. Both desserts were great accompaniments to the espressos.

By the end of the meal, we were stuffed--a pleasant surprise considering that if you stand all the ingredients alone, they are all pretty light and healthy. Also surprising considering that John typically eats as though he weighs 300 pounds. With a price tag of $8 per person (65 shekels), I'd say we payed exactly what the meal was worth, if not a bit less! GoooooooOOO cheap meals!

For those of you who want to become familiar with the barest roots of a traditional Middle Eastern meal, this place is perfect, but why eat a slice of plain bread if you can make toast with butter, honey, and cinnamon? Can you see where I'm going with that? Put another way: if you're looking for any sort of loud Middle Eastern flavor (and if you're looking for Middle Eastern food, I say you should be looking for this),  you probably won't find it here.
Despite the fact nearly everything could have used more flavor overall, I felt good throughout the meal simply because it's nice to stick with the bare ingredients every once in a while and still feel like you're still eating well.

So, I'll give The Camel a B+, although I don't see myself returning anytime soon because I can easily make this meal at home--no secret ingredients or flavors necessary. No doubt, however, I will now have to get crackin' on my own perfect hummus recipe (and by that I mean sign up here to receive updates in your inbox and you'll soon have my date ball AND hummus recipe. Lucky you!).

The Savings: John and I don't often go out to eat, but when we do, we often keep costs low by sharing a combo plate. This way we get to try a lot of what the place has to offer while keeping costs down. Nine times out of ten we still end up getting more food than we can handle, and we're not even paying for two entrees. Zinga!