Memories of Ephesus and Arrivals to Greece

This year ol' S. Claus gave me a wonderful, four-week-long present: pet/housesitting for an amazingly lovely British couple in their remote house in Greece AND having my parents come visit for Christmas week.
So yes, I'm in Greece now (surprise!).

We have the honor of caring for the sweetest Jack Russel (who knew they could get to this level of sweetness?) and the most soulful rescue-hound mix you'll ever lay eyes on. There are olive trees packing us in from every corner, and from the half-wrap-around porch you can gaze out at the expanse of ocean while  having lunch and playing backgammon.
There is a fireplace, there is consistent hot water (glory, glory!), and there is a kitchen with all the appliances I could dream of.
Am I dreaming?

But let's backtrack a little and I'll finish the story of Turkey (the country, that is...).

Setting: a couple weeks ago...

...As we left the ancient city of Ephesus in south Turkey (see pictures below), we began the three-hour bus ride to our next destination. We happened to have wifi on the bus (oh, technology!), so I checked my e-mail and noticed I had a "flight alert reminder" from Travelocity.

I then realized that I had made a terrible mistake.

I had thought that our flight to Greece was in five days. It was the next morning. We were at least 11 hours away from the Istanbul airport, and we were on a moving bus headed still farther away.

There is a tenable explanation as to how this date had gotten so dreadfully confused, but that's neither here nor there. The point was, we had to change direction, fast.

We hopped off the bus at the nearest city and caught the next one to Istanbul.

Luckily, as we waited in Aydin for the bus, there was a farmers' market right around the corner, so we stocked up on olives, fruit, salami, and cheese and were set (er, as set as we were gonna be). 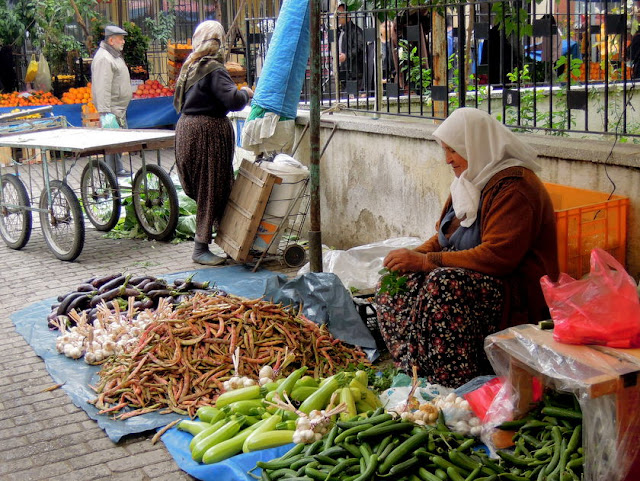 Whirlwind: we arrived back to Istanbul, made our way back to our Ismael's apartment to collect and pack the rest of our belongings (it bears mentioning that Ismael wasn't around to receive us, but he had left a key for us when we told him our predicament. Oh, the trust and kindness of new friends!), slept for two hours, then caught a bus to the airport at 5:30 the next morning.

And there our Turkey chapter ended (a bit too soon?)...

Before we move on, check out our amazing visit to Ephesus (remember you can click on the photos to enlarge them). 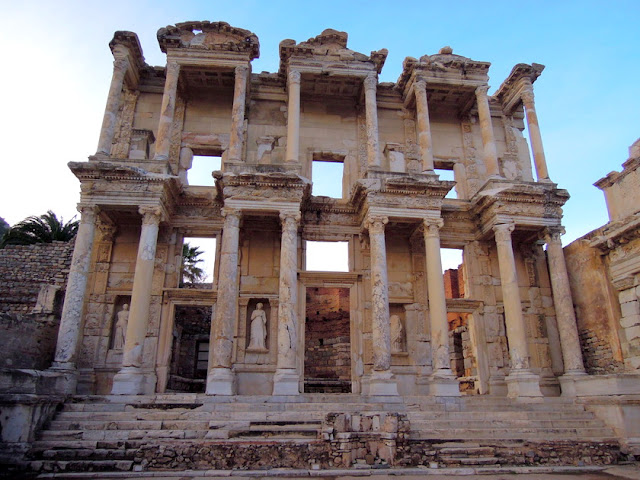 Above are images of The Library of Celcus, a Roman mausoleum and library built in 2nd century AD, and its surroundings 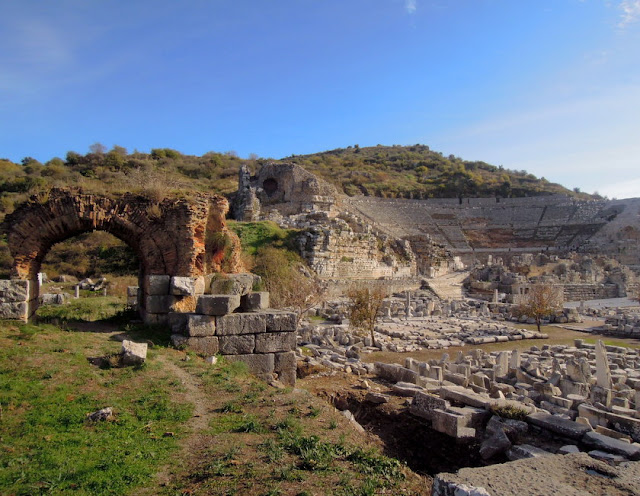 A view of the Great Theater, created sometime around 40 AD, where it is rumored that Paul the Apostle preached the gospel for over three years. It can seat over 25,000 people.
Did you think you could get through this without seeing any cat photos? 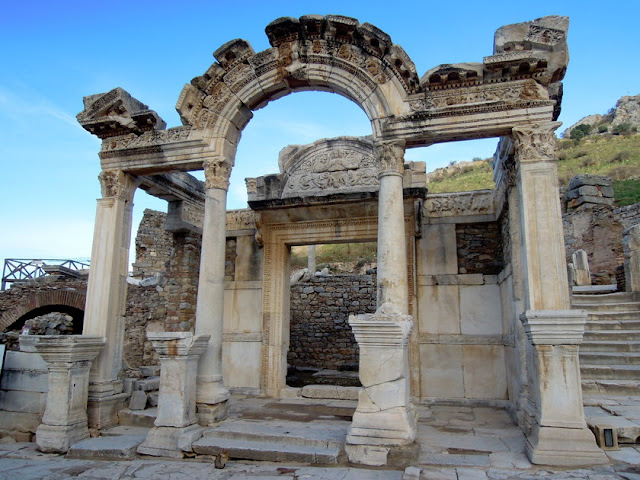 The Temple of Hadrian, John admiring the amphitheater, and...more....ruins. 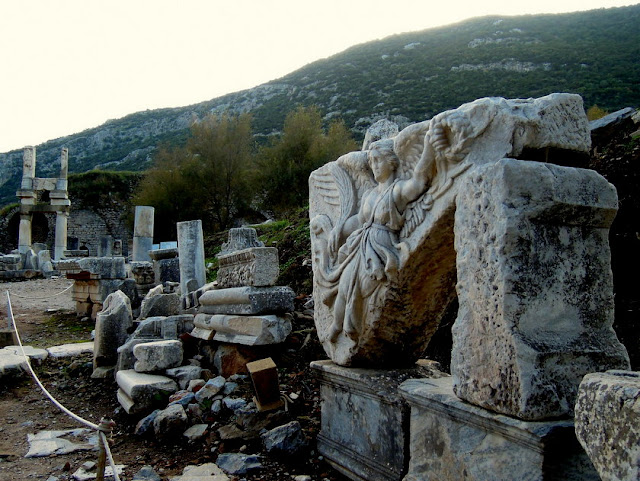 Considering how many museums I've paid to see sculptures like these, it was pretty incredible to see them in their "natural habitat." Top sculpture is of the Greek Goddess Nike, followed by the statue of Schlastica in the bath house, and finally a view of one of the streets...Don't you think that marble would have gotten pretty slippery when wet? 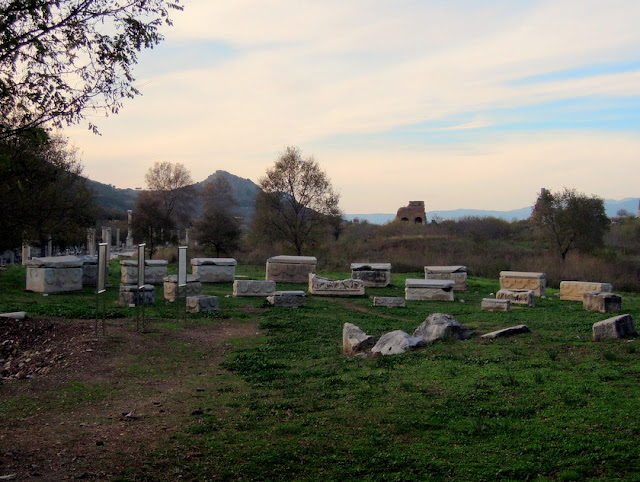 Ephesus tombs chillin' on the lawn
At above left you can see the bathrooms, where people sat closely next to each other while taking care of business. The toilet seats were positioned over constantly-running water and rumor has it that a band would play nearby to drown out noise...what noise? 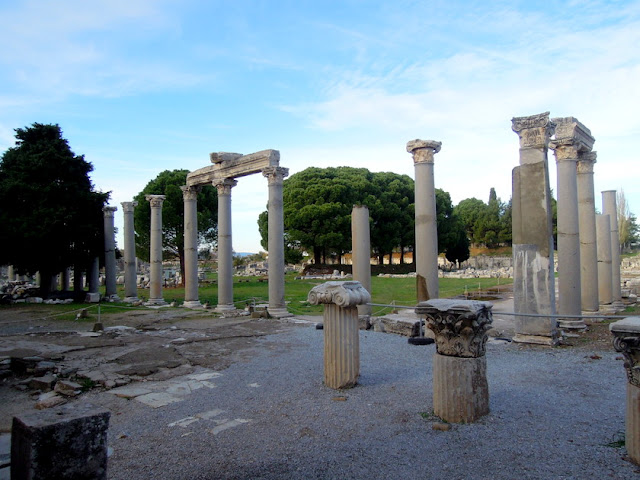 As far as getting there, if you're looking for the cheapest way to get to Ephesus from Kusadasi, find the minibus station (a 10-15 minute walk from the main street by the ocean) where you can find buses leaving every 15 minutes or so for only five lira  (about $2.5) per person. If you're willing to just ask people for a little help, this route is very painless and saves you lots of money. This is in the face of taxis that try to charge you $20-40! The minibus drops you off about 1km from the entrance, and it’s a lovely walk. Ignore the taxi drivers that might be trying to lure you in with warnings that to see Ephesus on foot is a long trek—it’s not. The entrance fee is 25 lira and clearly worth it--where else can you get such a pronounced rendering of ancient Greek and Roman life? 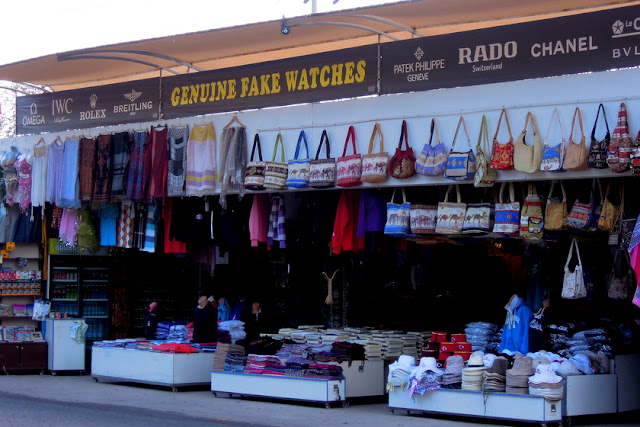 When you’re finished, head back to the other side of the road from where you were dropped off (yup, just kind of...stand on the side of the road...)and wait for a bus back, then go back to town and eat a kebab.

We were sitting outside and I get cold easily, I admit it. There were plenty of pickled hot peppers to warm me up, though, and the foamy yogurt drink, ayran, (top left) may not have made me warm, but it did make me happy.

So, there's our Turkey wrap-up...or dare I say...Turkey wrap? It's a food blog, right? (Imaketerriblejokes)

For my part, I think it's time to get the coffee on and go enjoy some Christmas pancakes!