After more than a year, I am proud to present to you all a project that I have been relentlessly and passionately working on.

And by working on, what I mean is thinking about...a lot.

But the point is, I finally did it. 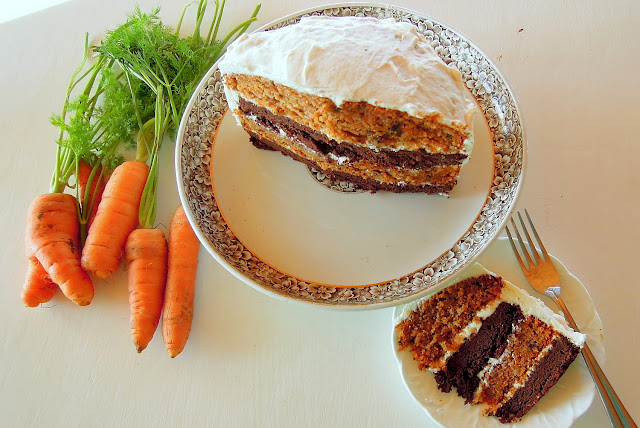 One day, I saw a picture. I grew overwhelmed by the recipe that followed said picture. I searched for other recipes instead. I was unsuccessful.

And finally, I did it myself...nearly two years later (heyyy I needed a muse sometimes, ok?)
Results?

Do I really have to tell you that the lovechild between my grandmother's carrot cake recipe and a dense chocolatey brownie was over-the-top-amazing?

Because I'll do it. I'll tell you.

It was AMAZING. Over-the-top amazing, that is. 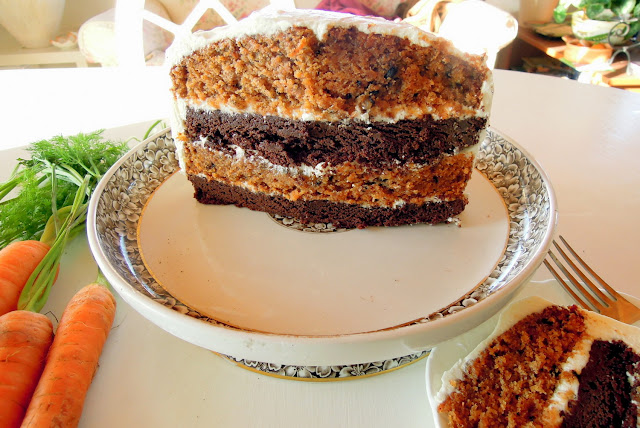 It's hard to explain something like this, because the idea is almost too simple: Step 1: take two delicious things, Step 2: Combine them, Step 3: Eat and try not to faint.

But I'll try to explain anyway.

First off, when you make any recipe that originates with a grandmother, you can bet that it has stuck around for a reason. And when you come from a family of food-lovers like mine, it's a good reason. Grandma Pat's 14-Carat Cake (puns! we love puns!) is a light, fluffy, and richly-layered affair that we hope for come every holiday in my family.

Obviously, it would be the recipe to follow for my Brownie Carrot Layer Cake. 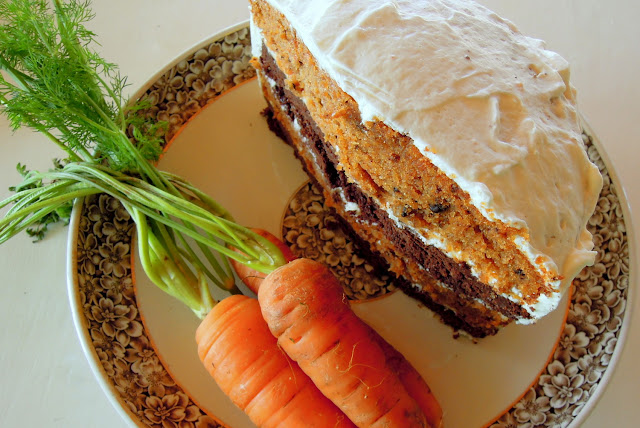 It took a bit more thought in choosing my brownie recipe. I almost went for a rendition of my beet and bulgur brownies, and while I'll be sure to do that in the future, I didn't want this to be a cake geared to healthiness, at least not this time. And it definitely isn't. Definitely.

by making them more chocolately (obviously) and a bit more cakey. 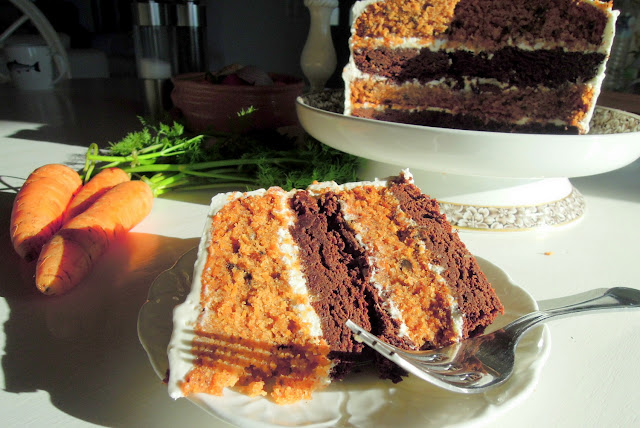 Guys, I hate to toot my own horn, but this cake has crossed into the realm of absurdity. I don't even know what's real anymore. It's a good cake.

I was nervous that the carrot and chocolate would somehow clash, but the food gods had something else in mind. The layers instead come together for the perfect balance of sweet and lusciously rich, heavy and light, creamy and toothsome.

My grandmother's recipe calls for a buttercream frosting, but since we're working with some potentially heavy flavors and textures here, I opted for something a bit lighter: another hybrid, in fact, of heavy cream and cream cheese, with slightly less sugar than normal.  Anything heavier added to this cake, and I think I would have turned into Paula Deen. 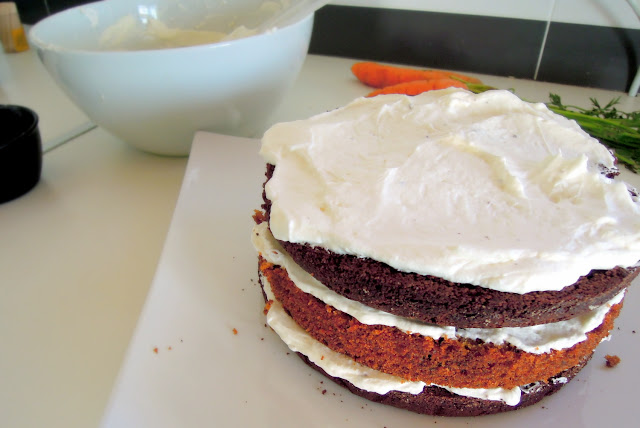 As for the actual recipe, the process may seem long, but it's pretty painless once you get working. You can prepare the carrot cake while the brownie cake is baking so total prep time is pretty consolidated. The brownie also needs longer to cool.

Be warned, this isn't a cake for one to two people...so invite some friends and family over and get bakin'. 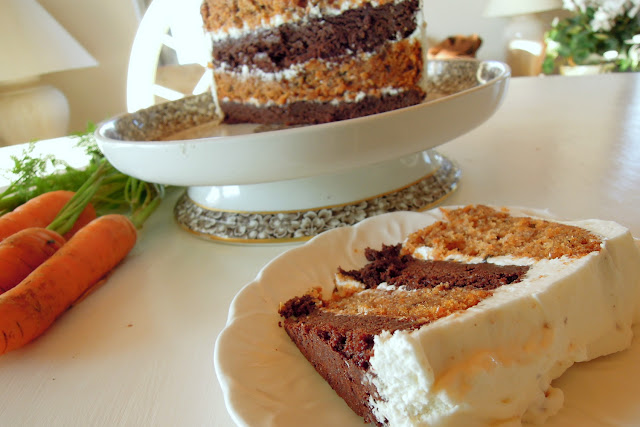 Melt the butter, then add chopped chocolate and cocoa powder, whisk until just melted, then remove from heat and stir in sugar and vanilla. Vigorously whisk in the eggs, one at a time. Add flour slowly, and then stir for one full minute until not grainy.

Butter and lightly flour only one 7x3-inch round baking pan (it's especially important that you use a reliable springform or this method to enable you to remove the brownies without crumbling).

Bake for 30-40 minutes, or until a toothpick inserted in comes out clean. Do not over bake.

Remove from the oven and allow to cool completely on a wire rack...seriously. If you don't let it cool, there is a chance you won't be able to remove it all in one piece, which would not bode well for our layer cake.


*I made enough carrot cake for two pans because I wanted an extra plain loaf on-hand (and/or a back-up in case you do things like accidentally cook the first round on low broil the entire time...)

Directions
Preheat the oven to 350 degrees

In a large bowl, sift the flour, baking powder, and baking soda, then stir in salt, cinnamon, and nutmeg.

In a separate bowl, beat sugar, oil, and eggs until well-combined.

Bake for 35 - 40 min, or until a toothpick inserted comes out clean. Remove from oven and allow to cool for about 10 minutes, then carefully remove from the pan and fully cool before moving on.

Cool a few minutes in pans.  Turn out on wire racks to cool thoroughly.

Step Three: OK, if you've prevented yourself from eating the respective cakes up until this point, well done! Stay strong. If they're completely cooled down, we can move on.

Now we have to cut the cakes in half length-wise. Take the [completely cooled] brownie-cake-thing and one of your mini carrot cakes and run a thin wire, fishing line, or floss through the middle of the cake ("latitudinally").

Step Four: Now that we have our layers layered, let's make the frosting.

Directions
Using an electric mixer, whip 3 tbs confectioners sugar and heavy cream until stiff peaks form, about 3-5 minutes (meaning that if you slowly pull the whisk out, a peak will follow and hold its shape). Set aside in the refrigerator. 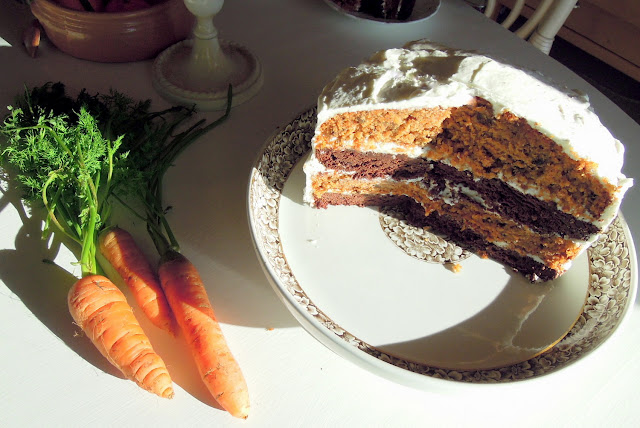 Wipe that brow, we're almost there.

Starting with a brownie layer as the base (since it's the heavier layer), ice the cake with icing between each layer and all around. I won't go into detail here because this post is already full of details, but I will direct you to this webpage for in-depth instructions on how to ice a cake.


Follow the Chowgypsy in your inbox by clicking here!