*Warning: this post has explicit photos of deceased pigs...


Q: What do you get when you combine a dead pig, a wedding, and a John Amory?

Who ate the pig? The wedding party or the John?

OK, you got me, I’ll tell. Mostly the wedding party ate the pig. But the John helped. I helped, too. I helped a lot. I will regret not being able to provide help once we leave this place.

You've all heard the quote, “If you build it, they will come.”

Well, Karine and Fred built it. In 2004, they used all they had to buy a big chunk of land with some aged and falling buildings, began the slow process of restoration, and now people come from all over France to have weddings, parties, or family reunions in what they created.

All Karine and Fred have to do is rent out the space sometimes provide the meals (Karine is a licensed chef). Note: I'm absolutely over-simplifying their careers.

They work hard, but it's theirs and  they like it.

And they have the system down. It's a sweet gig: weekends only, professional kitchen right next to the house, access to party time, leftovers, etc.

And sometimes you can even get an excitable work-exchanger to help out. Like us!

Up top, for example, we have John plastic-wrapping Brittany-style crepes (or galettes) for a wedding luncheon. Traditionally served, they’re filled with a sausage (from the farm) and butter. Sometimes, the French keep it simple.

For the record, John and I probably wrapped about 200 of those babies that day.

Excuse me if you find the following dead pig pictures graphic. I suppose enough exposure de-sensitised me. At any rate, it's part of a day in the life, so bienvenue.


Apart from food prep, what have we been doing?

Well, we had a little photo session with some of the un-dead pigs.

And before you turn your noses up at hanging out with pigs, they’re actually pretty smart. They protect their skin in the sun, they use the toilet in designated non-feeding areas, and they have personality . . . overall, they’re very cool half-dog/half-goat/half-flamingo creatures.


We also spent more time with the sheep, who unlike pigs (and goats, for the record), are relatively boring and dumb.

But they do mow the lawn in an earth-friendly manner and they do always come when called.

Which is kind of stupid of them sometimes (“like lambs to the slaughter…”).

Maybe I have a thing against sheep. I suppose it's just hard for me to see the point. Their wool is not worth much in these days, and unless you go through the process of slaughtering them yourself, you have to pay to get that done.

Is the cost of rearing them really worth just having lamb to eat? I think I'll buy mine off a neighbor.

Nonetheless, below you'll find a video of said sheep call and the resulting stampede. You just kind of stand in the general vicinity of where you don't want them to go, and they move.


I also had a photo session with the farm's Poitou donkey, who happens to be A-MAZ-ING.

He’s huge. He’s huge and his ears are almost huger. And he basically has dreadlocks.

Apparently it's the oldest recognized breed of donkey in France, and its extreme rarity coupled with its sociability makes it quite a prize to have around. I'm winning over here, y'all!

And just to reiterate, the thing can grow dreadlocks. I'm kind of obsessed. Feel free to purchase me one as a gift? 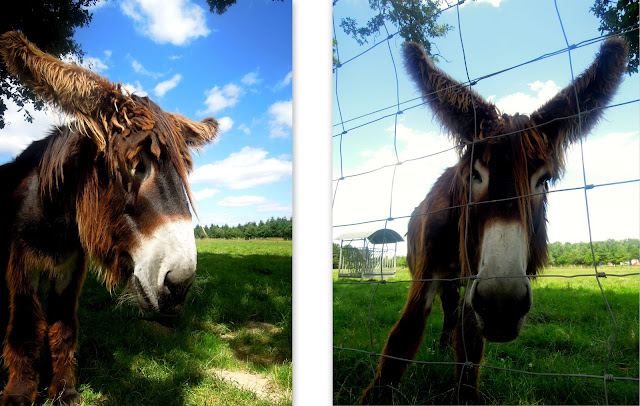 We ate some “authentic” French home cookin' and discovered that frog legs, despite all the hype, are too much work for the payoff (my opinion is now authoritative).

Plus, Karine and Fred told us that most of France gets their legs from Asia! We’ve been duped! No more legs for me unless I’m absolutely in the mood and they’re absolutely local.

Regarding escargot, I am ever-faithful. You can't quite tell below, but some came in edible cracker "shells" which were buttery and crunchy and mind-blowingly good.

A lot of Americans don't realize that tinned escargot are sold in most grocery stores over by the clams and anchovies. They're delicious—but buy French brand Sabarot here

if you're feeling antisocial.

Serve them with shells bought separately

, or hollow out mushroom caps and bake them within. I dump a mixture of butter, olive oil, garlic, and parsey over them before baking and voilà!

Lastly, remember those rabbits John helped to butcher? Well, we ate them.

I mean, we ate parts of them, cooked in a rosemary Dijon marinade over carrots and mushrooms. Delicious.

But would we kill and eat rabbit again (i.e., would John kill a rabbit again while I nervously/uselessly stood by)?

Probably not. (read about our changing view on meat at the bottom of this post from last week).

As our time here draws to a close, I know that I will miss the Auge family dearly.

Our work-exchange with them has been unforgettable, primarily because they truly made the experience an exchange.

It's what traveling is all about.