I’m afraid to put a title to it for fear that a titled thing is easier to have taken away, but let’s face it. 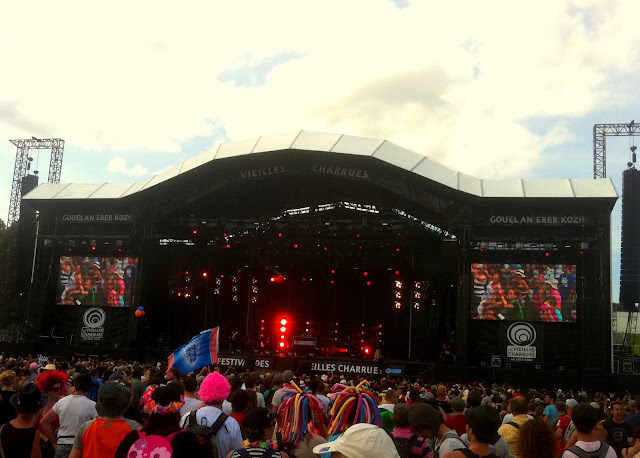 Or maybe John is the lucky one and I'm just riding coattails. At any rate, sometimes it’s stunning.

Take this past weekend, for instance:

Since our arrival in France, John and I had been scheming to find a way to attend Les Vieilles Charrues (meaning "The Old Ploughs," named after the farming town in which it takes place) a brilliantly-scheduled music festival with the likes of Sting, Rodrigo y Gabriela, M83, The Cure, and more…. But sadly, in the end we decided that it would be too expensive.

Remember the French musicians whom we had met through Couchsurfing back in Wyoming? And how we were recently reunited with them? Well, both of the guys would be playing at said pined-after festival--Etienne with Sin Astesia and Antoine with Colin. Well, at one week before showtime, what do they happen to have handy? Two free passes to the pined-after festival, you say?

Go ahead, just put them into my gaping mouth.

They offered them to us casually, as though fate itself hadn’t been the one to guide their hand. But I see what’s going on here, fate. And I thank you.
Karine and Fred very kindly let us off the hook for the weekend, (“music is important,” Karine assured us), and before we knew it, we had set up our tent in Carhaix, France and were on our way to see live music.

Since John and I didn't have to pay for tickets and transportation was extremely cheap using Covoiturage, France's carpooling hook-up, we (gasp!) bought festival food for dinner every night. A daily kebab, smoked pork (basically huge slabs of bacon), roasted potatoes, and paella. Not exactly French cuisine, but 100% necessary nonetheless.
Yes, it was amazing. I wonder if it really happened. As far as festivals go, the music was great, the camping was well-situated (although parking cars separately must have been at least two miles away for the late-comers), the food was good, but not varied enough, and after the shows, the French people apparently like to stay up all night singing drinking songs together. All night.

The Savings: Using Covoiturage made getting there and back absurdly cheap--total cost of that travel was $40 each (for about four total hours of driving). This also meant that we didn't have to pay for parking :) We brought plenty of food for breakfast and lunch, so that meant we only paid for dinner in the venue.


Next up: week two at La Ferme du Forsdoff!